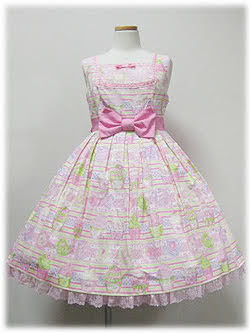 I believe this is the yellow colorway but I have a very hard time telling when I look at the stock photos to be honest. I'm pretty sure it's the yellow.

Y'know for all the shit this series got from the Western comms (hilarious, because the print was inspired by popular American Designer Cupcake shops that were popular and all over the place in the early aughts) and for how much *I* used to hate it as well, this is actually a really cute series. I think the black is pretty adorable as well, idk fight me I guess lol. This cut is a bit short and tends to come a little higher into my armpits than I would like, but I just like this cut so much I'll probably end up altering it to add some length to the straps at some point.

I got the full set from a retired lolita in our comm (who is HILARIOUS btw, ty Amanda you're an absolute angel) and I can't wait to wear the whole set together when it's maybe a bit warmer out.