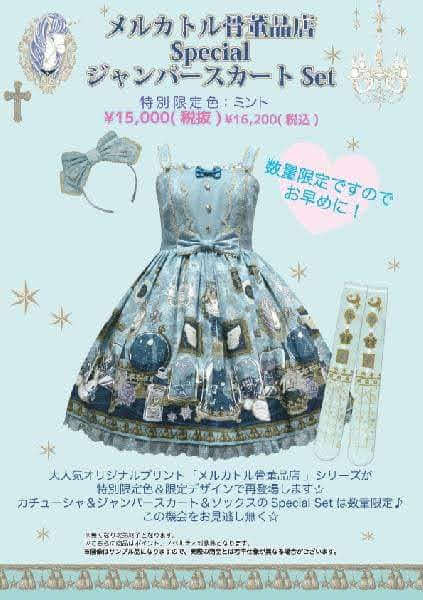 I was secretly mega butthurt when this special set came out and I knew I couldn't afford it. I told myself I didn't need it, after all I had the lavender JSK and who needs multiple colorways of the same print? That's just silly and excessive, right?! Totally!!!! (Not.) I kept an eye out on secondhand sales for a while waiting for it to pop up, but so many times it came up with just the jsk, or just the jsk and headbow, but I really wanted the whole set. Finally I found someone selling the set for albeit more than it was worth on CGL, but at that point I was just so happy to find the complete thing I was willing to pay the price.

I paid her on time on a payment plan, and was super excited to have it just in time for Christmas! And I waited. And waited. And waited some more. I messaged her, no response. Messaged her again, a week later, still nothing. She had all positive feedback prior so I was confused; finally I reached out to her local comm to see if something had maybe happened to her heaven forbid, and one of the mods was able to look into it and let me know that she was moving! Ah, yes. Moving. Out into the middle of nowhere, with no internet. It'd have been nice if she could've told me that herself, but whatever.

Some more time passed and I was losing sleep over this damn set, so finally I just filed a Paypal claim, and that finally seemed to get the seller's attention. She refunded me half, and finally sent me the set--so I ended up paying exactly what I would have had I bought it brand new at first release. Ironically, it worked out.

All that aside though lol I really still love this set; the colorway is imo the best one of all the Mercator series, and the socks ACTUALLY match it colorwise pretty spot on! The headbow is cute, it has the cute AP star lace, and it really is just perfect in every way. It's a great dress, I love wearing it!