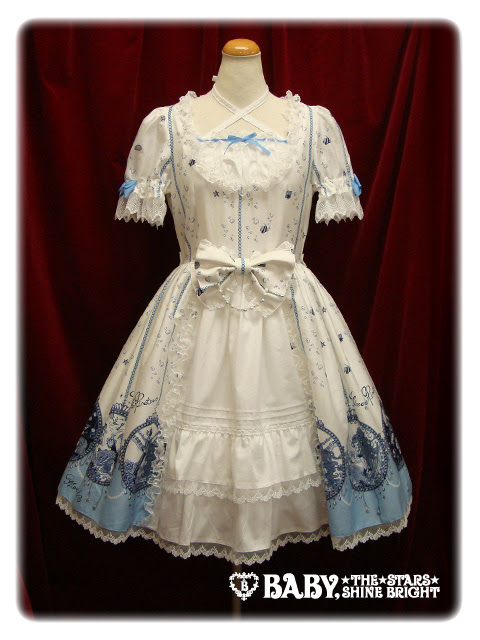 Melty Mermaid was one of the first dresses I spotted and wanted desperately when I was a wee babylita. Of course back then I knew nothing of brands still, and the one I saw was in fact a replica, not the original! I didn't buy it thankfully (it was DoL *shudder*) and learned of its origins later and always kept an eye out for the real one in black and purple one day... Fast forward to 2019, I had just purchased the Aqua Princess JSK in blackxpurple by AP after a long and patient wait. I thought of Melty Merm again, and how I hardly ever saw her for sale, and realized that maybe the black and purple was gonna be harder to coordinate than I thought, and eventually forgot about it again.

I think it was a random search through new listings on either Fril or Mercari that led me to this; the seller had this white OP for sale along with the canotier, for dirt cheap because it was heavily damaged. At the time I thought it was maybe just a few stains and the pictured holes in the lace, but when I got it in person I realized it was so... So much worse lol.

I don't think this dress had ever been washed before, not ONCE. It was IVORY, and after putting her in the wash, the water came out the same brown as the stone tiles in my shower and she dried BLEACH WHITE. As in SHE WAS SUPPOSED TO BE BRIGHT WHITE, BUT WAS SO DIRTY SHE HAD TURNED BASICALLY YELLOW. EW. She's almost literally squeaky clean now; only faint stains from makeup remain on the neck ties, and I was able to mend the holes in the lace well enough that nobody would notice unless if it was pointed out to them. All that's left is the waist bow, which also needs to be washed but first I need to remove the pin back and the broken pearl chain to prevent rusting before washing it and then repairing the chain. In the meantime though, she's perfectly wearable without the waist bow, and her canotier is also fresh and clean now, too.

Also for some reason I see NO talk about this but THE ARTWORK ON THIS DRESS WAS DONE BY YOH MONOCHROME? This was never once labeled as a collaboration piece in any of the promotional material for it, so I wonder, did Yoh perhaps work for AliPi at one point? Or, like Imai Kira in the beginning, was Yoh just not popular enough an artist at the time to call it a true "collaboration", similar to the Dollhouse OP (which I believe is also an Imai Kira piece?) I want to know more.