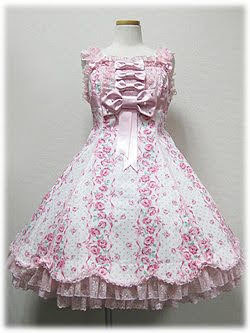 I got this and the matching canotier as a set off of a kind lolita on the EGL Comm Sales LiveJournal when I was still new, maybe only two or so years in to the fashion? I actually found that lolita not long ago on Instagram, and she's still active! I didn't get the matching OTKs at the time because I'd read all the discourse about how socks looked bad stretched out on calves, and as someone with muscular calves I was convinced they would look HORRIBLE on me. I didn't find out until many years later such wasn't the case, though.

For me this will always be the ultimate hime lolita dress/print, because it was so popular for that hime gyaru-inspired look back in 2012-2013. I'd still love to properly style it that way one day... But now this dress has reached a point where young lolitas don't recognize it. I wore it to Paradiso and the ONLY lolita there who recognized it as AP was Tyler Willis (of course.) Most others kept asking me if it was Taobao. ;__; For a dress that used to sell for $600+, it's very hard for me to wrap my head around...