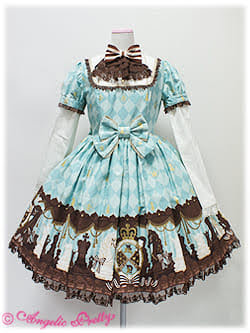 When I was young in this fashion, Chess Chocolate was one of those top tier flexing pieces that every popular lolita had. She'd have the full set, all the chocolate-themed accessories to go with, and take gorgeous DSLR photoshoots with her and her friends also wearing their expensive Chess Chocolate sets to post all over Tumblr and Live Journal. It was one of those series I adored, but much like Melty Chocolate, knew I would never realistically afford. Despite that, I always kept my eye out for the bustier JSK in mint, hoping one day, maybe...

Fast forward to Paradiso 2019. I had brought stuff with me to sell/trade at the swap meet, and happened to see someone selling their Chess Chocolate OP in mint for some $200, which I was hesitant to pay because I wanted to save my money for the ~*burando*~ that would be in the market on day one. I chatted with them and found out they were leaving sweet to move into gothic and classic, and I was leaving gothic to go back to sweet! If the dress didn't sell by the end of the meet, they'd trade it for my Wolf In Frame JSK. Lo and behold, everything falls out of trend sometime so I found them at the end of the meet and we traded!

Sure she wasn't my ideal cut, and I normally never went for OPs, but I figured why not and it turns out it was great that I did. The sleeves are ACTUALLY long enough on my tallita arms, and it's a super comfy OP that fits me like it was made for me! Since getting this I started to open up to OPs more and more, and I've finally seen the light and realized that they really can be just as versatile as JSKs--just in different ways! I love this dress, and I think babylita me would've been really proud knowing I eventually got it.

(Secretly one day I'd love to own the princess set of Chess Chocolate but I have NEVER seen one for sale so that will probably not ever happen lmao.)