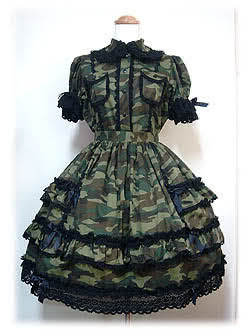 I am probably one of the luckiest lolitas on this planet, honestly. This was a birthday/Chrimmis gift from my boyfriend and... I still can't believe that it's here? And that I own it? And that my boyfriend bought me something worth THIS MUCH?

While I'm still relatively new to Psycho le Cemu (not for lack of exposure, I just wasn't as interested in the J-fashion music scene when I started out, I was already so overwhelmed just by the clothes,) I still REALLY adore them. I especially find Aya's work within the group to be particularly fascinating. His choices for their costumes, the way he portrays himself, and how popular he was in the early GLBs, it's all just so peculiar and fun to me. I almost died of laughter the first time I heard his real voice in an interview--I didn't think it would be so deep!!

It's my dream to wear this set to a Psycho le Cemu live show one day, that really would be so cool. I actually also want the other Aya x AP dress, the shiny satin monstrosity, but I admit that that might be pushing my luck a bit haha.

Collaboration aside I actually really love this set; I love the versatility in it being a blouse and a skirt, so I can mix and match it with other pieces. I can't wear the skirt at the moment, but hopefully after more dieting and exercise that won't be an issue! If I can at least get it on comfortably in time for Paradiso next year I'll be very pleased lol.